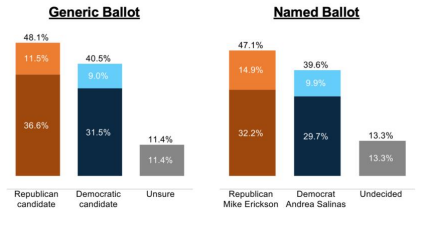 The poll, conducted by Cygnal, reports Erickson has a “dominant” lead in the district with 47.1% to Salinas’ 39.6%. Independent and unaffiliated voters favor Erickson over his opponent by 10%.

In an analysis, the national political media outlet, POLITICO, stated, “The most encouraging poll for Republicans came in Oregon’s new 6th District, where Republican Mike Erickson led Democratic state Rep. Andrea Salinas by 7 points, 47 percent to 40 percent, with 13 percent undecided. In a district that Biden won by nearly 14 points, his approval rating is underwater by 20 points. Republicans lead on a generic ballot by 7 points — a rough reality for a seat that Democrats drew to be safe.”

Erickson said the poll speaks to how frustrated and discouraged voters are with extreme progressive politicians. “Andrea Salinas’ strong support for tax increases and policies that fuel inflation as well as dismantling the police will be rejected by voters,” he said.

Erickson added that Salinas’ position on public safety does not align with what Oregonians want. “She consistently votes against law enforcement and even wants to allow incarcerated, violent felons to vote. In our last legislative session, she voted to allow homeless camping on public land and city sidewalks.”

In a summary memo, Brent Buchanan, President of Cygnal, notes, “Erickson starts with a strong foundation,” with the political environment leaning Republican in this newly drawn district. The poll finds that one-third of the respondents say inflation is their top concern. That is up from 22% in early June.

Erickson confirmed that the poll reflects what he’s hearing from voters. “Oregonians don’t need a poll to tell them that our nation is in an economic crisis. They experience it every day. Americans are suffering under Biden and Pelosi’s policies. Voters know we need a small businessman and job creator, not another political insider in Congress.”

Erickson will face his Democratic opponent in the Nov. 8, 2022, General Election.

About Mike Erickson: Mike Erickson is the founder and President of AFMS in Tigard. AFMS is a supply chain and logistics consulting firm serving customers for over 30 years. He resides in Clackamas County with his wife (a nurse) and two children. He is the Republican candidate in the race for U.S. Representative in Oregon’s sixth Congressional District, which includes parts of Washington, Yamhill, Polk, and Marion Counties. This is the first time in nearly 40 years that Oregon has added an additional seat in the U.S. House. www.MikeEricksonforCongress.org.

ABOUT CYGNAL: Cygnal is an award-winning international polling, public opinion, and predictive analytics firm that pioneered multi-mode polling, text-to-web collection, and emotive analysis. Cygnal consistently ranks as the most accurate firm, and clients rely on Cygnal’s ability to create intelligence for action. Its team members have worked in 49 states and 17 countries on more than 2,700 corporate, public affairs, and political campaigns.